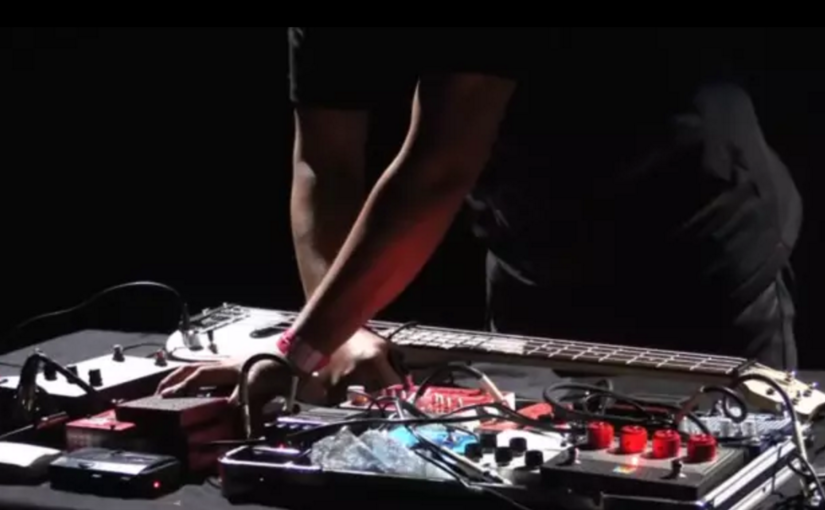 Lars Åkerlund is a composer, sound artist and performer of mainly electronic and electro acoustic music. Classically trained but mainly active in the alternative electronic scene, co-founding bands like P.I.T.T. (with Zbigniew Karkowski et al) and Lucky People Center (with Johan Söderberg and Sebastian Öberg).
He studied classical guitar at Conservatorio del Liceo, Barcelona and classical guitar and electro acoustic music at the Royal College of Music, Stockholm, at the EMS, Stockholm as well as musicology at the University of Stockholm.

He composes and performs live with computers, controllers and different live electronic equipment, such as amplified monochord.

Since the 90’ies he makes music for contemporary dance with choreographers Per Jonsson, Björn Elisson, Johan Inger and Cristina Caprioli and the Rambert Dance Company, London, Finnish National Ballet, Helsinki, the Gothenburg Opera Ballet, Stockholm Opera Ballet and most of the major Nordic dance companies, as well as the companies of the choreographers. 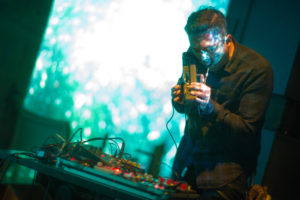 Sin:Ned, aka Dennis WONG / WONG Chung Fai, is an improviser, experimentalist and noise addict from Hong Kong. He regards himself as a medium and his works, only manifestation of our hidden sonic aspects. His practice on noise and sound signifies an implicit form of mysticism in search of direct and pure physical experience through chaos, errors and the extremes. As an instrumentalist, he struggles to defy all rational and orthodox structures by pursuing a self-referential sonic existence. His works involve a wide range of tools and materials such as Chapman Stick, guitar, laptop, hardware synths, hand-made instruments, feedback, field recordings and various unusual non musical objects and devices. He is the co-founder of Re-Records (www.re records.com), SECOND, Twenty Alpha, and the Hong Kong organizer of JOLT Festival (http://joltarts.org/home). In addition to being core member of various experimental outfits such as No One Pulse, DECADE Ensemble, Archetype Ensemble, After Doom, adeo and underture, he is also the ritualist behind home brew events such as Kill The Silence Festival, and live performance series NOISE to SIGNAL. 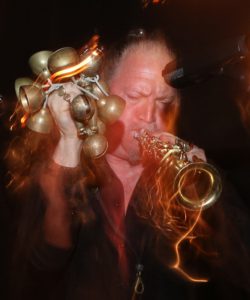 Founder and artistic leader of THE TOO MUCH TOO SOON ORCHESTRA.

About music & the anti-fascist existence

We are a part of a new international network of experimental composers moving trough the spheres of the improvisation, electro-acoustic, the serial and post-serial contemporary music, the techno, ambient, noise & other micro genres of new electronic music and that music is making itself heard, comfortably navigate between clubs & concert hall, between (post-)popular youthculture & the avant-garde of ’contemporary classical’. As a new dimension and complement to the orderly dialectics of classical Marxism it uses the theory of complexity : a method of complications and implications as an antithesis to the dialectic method of restricted sequence of cause and effect. To complicate means crossing the borders of categorization, exposing and even creating unexpected relations; like composers do in their computer, sampler and synthesizer based music and DJ’s do in the mix. Such is the praxis of the NEW AVANT-GARDE : a democracy of sounds breaking through predictable hierarchies of instruments, ensemble combinations and instrumentation (the usual privilege of voice in classical music, sax solos in jazz and guitar solos in rock music) and of narrative structures (the familiar dominance of plot and character in art).

Music is more than the reproduction of tones, it is a process of creating and producing sounds and forces. The tone is first of all just a noise that is bound in a canon of rules – and only becomes a tone in these circumstances. The music of the whole occident builds a system, creates models that filter the noise, the “rauschen” (a german word for rustle (leaves, silk, radio), rush (flowing water, wind), roar (storm, waves); rausch – intoxication, drunkenness; rauscshend – rustling etc., orgiastic (party) swelling (music)). Here the word is used to describe the electrical noise and allude to the other meanings of  the words) and the currents of sound. The computer, the sampler and the synthesizer are machines that through the varied possibilities of sound synthesis and calculations not only make new sounds audible and new structure possible but also restructures the process of the production itself. It is the musical work with structures and sound material itself that allows new energies and intensities to be captured.

We are becoming deaf and musically unconscious when we hear nothing but perfect harmony, perfect structures, just new academism, repetition and its refrain. Perfect melodies and perfect chords in popular music, perfect structure, instrumentation and electroacustic sounds in the “new music” scene, just the circulation of clean and sound sound currents, cleaned of the noises and sounds that could disturb prosperity that’s what music offers us today. This use of chords, melodies, voices, structures and electroacustic sounds that claim to be the music itself, create an aesthetic of boredom, a self sufficient repetition and artistic conformity. The tracks are overwhelmed by signature tunes, the concert halls by “classical” compositions and “new music” academism. This is the potential fascism in music. People are being manipulated into passivity and confimity by the the computer sound, the  synthesizer, the “new” pop tune and the “new music” academism . So the structure, the harmony, the chord, the sound even the tone itself must explode; one must open the door to noise itself, make even the channel to the sound currents quake. That is the place for the NEW AVANT-GARDE to burst in.

I am in opposition to the heavy machinery of institutional philosophy and its blatant complicity to power, that is preventing rather than encouraging people to think. I find classical philosophy (and classical education in general and music education in particular) an immense school of intimidation delivering specialists in thought and music, and in addition pressuring outsiders to conform to the phenomena they’ve come to fight.

My music and words should function as a tool kits for an anti-fascist existence. My music is a strategy and subversion, my compositions and writings should escape even my own intentions; the more unplanned uses that my music and words take on the more it pleases me. Those are the fundamentals of my music; I work with methods, instruments and tools that can directly inspire the process of producing sound structures, which will molecularise (break down) the forms of music and at the same time expand them. The new music-machines (synthesizers, computers, music software, algorithms) don’t function by technologically or musically defined precision ideals, but rather continuously produce unpredictable results, complications and implications. All this by multiplying noise, sounds, politics, notes and creating interfaces for the new.

About my music & noise

My music is a flow of sounds, noises, forces, it develops to a point where it goes beyond itself. The speed with which different sound elements follow each other, and the density with which they superimpose vertically, are so great that a sort of overload occurs, one which transcends the restlessness of arousal, like a film run through at a too hight speed. The occasional passages with tones, harmonies and sounds in a more “normal” rate can, in context, seem almost banal—a measure of the distance we have travelled in the music. The intuitive molten metal brutality of the music brings the player into the energy of a hot improvisation. A new music is created, a new speed of thinking and feeling where the intellect meets the manic raver. We experience an energy born of rapid movement, sound, noise, flow and expression. The music does something palpable to its listeners, or at least incites them to a form of action, of awakening.

The most immediate audible characteristic of my music is its noisiness. Abrasive, loud, fast. The textures and rhythms are never sweet or satisfying in the conventional sense; one has only to hear the primal screams of ”Pig iron” (The celestial fire CD/ANKARSTRÖM-Ö10 (Dror Feiler Solo) for tenor saxophone & live electronics)), the punk-free improvised thrash of ”Tio Stupor” (Saxophone con forza PSCD 81 (for alto saxophone & live electronics)) or the new composition ”Ember” (for symphonic orchestra & electronics (1997 Donau Eschingen festival commission) to realize that neither a pathetic World music prettiness, a pretentious  new romantic resolution, nor new music academism has any place in those improvisations/compositions, except as an antagonistic element. Nor do these compositions allow the conventions of modern and contemporary music unproblematically. My music uses ”noise” that is ”noise in itself; but noise, in this connotation, is not simply a haphazard or natural sound, the audible ”background” that encroaches on a work such as Cage’s 4’33”, as the audience is forced by the tacit piano to listen to its own shufflings, or to the urban soundscapes that emerge through an open window. It is a noise that is always impure, tainted, derivative and, in the Romantic sense of the term, beautiful like in Alka, OpFor & DiaMat ((FYCD 1007) By the Too Much Too Soon Orchestra). Noise, in the widest possible sense, is one of the central elements in my music as for its more popular “musical cousin” the Noise music. The abrasive raucousness, in the music is an attempt to alter the way people hear. Noise, as sound out of its familiar context, is confrontational, affective and transformative. It has shock value, and defamiliarizes the listener who expects from music an easy fluency, a secure familiarity (it can be a “modern” one), or any sort of mollification. Noise, that is, politicizes the aural environment.

The music is difficult in the sense that Adorno finds Schoenberg’s music difficult—not because it is pretentious or obscure, but because the music demands from the very beginning active and concentrated listening, the most acute attention to simultaneous multiplicity of movement, forces and expression, the renunciation of the customary crutches of listening which always knows what to expect and the intensive perception of the unique, the specific and the general. The more the music gives to listeners, the less it offers them. It requires the listener spontaneously to compose its inner movement and demands of him not mere contemplation but praxis.