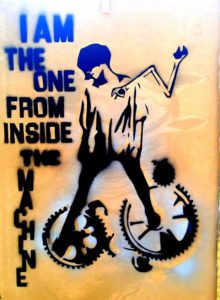 S-pichka is made up of musician-artist Tsomak and poet-performer Milena who met in Armenia in 2008 and started to collaborate while living in Sweden in 2014. Due to various political, social-economical reasons, both duo members currently reside outside of Armenia, yet continue to create music together. Tsomak is the artistic genius behind the music and Milena composes lyrics to reflect on post-Soviet space, globalization, immigration/exile and of course, love. With over 15 years of experience in making music, Tsomak started the first all-girl punk band in Armenia, Incest, and later on Pincet. In Sweden Tsomak has merged her past with her present in an electro-trance-punk style, transcending any one particular genre. S-pichka makes it a point to step outside of the boundaries assigned to ‘art’ as a genre. Their music is both visual and performative. And un-apologetically riot

Dgeral has shattered dance floors for the past seventeen years. Dgeral started in Caracas, Venezuela, as one of the first queer DJs/producers to represent the electronic music movement with the best eclectic selection of music. In 2004 Dgeral left Venezuela for Europe and new musical experiences, settling in Barcelona. Since 2014 Dgeral has lived in Stockholm, looking for the perfection of sound, ” and starting a new feminist queer trans electronic dance club that supports feminist queer trans artists, under the name of ”BOi BOi CLuB Stockholm.” Dgeral’s style is original and eclectic.