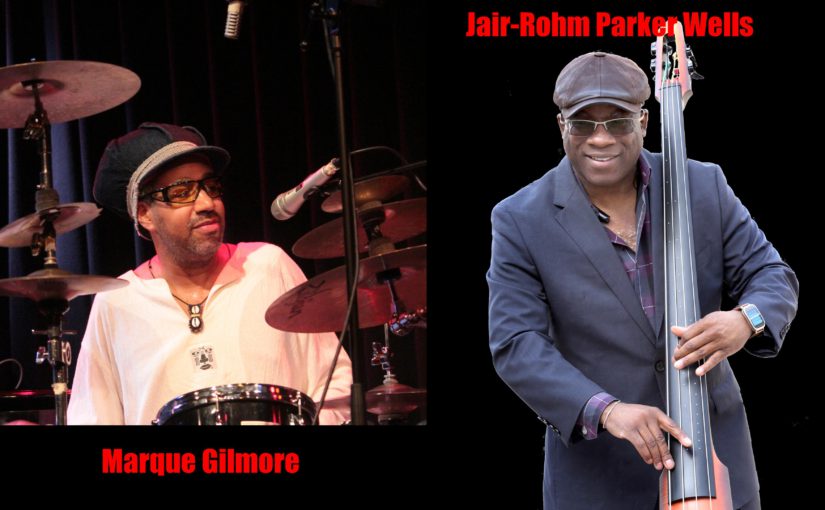 Marque Gilmore on “Acousti-­Lectric Drumz” and 21st century Electric Bassist Jair-­Rôhm Parker Wells have been described as “…the sound of the future today!”.  Free improvisation informed by contemporary electronica with deep roots in Jazz, Funk, experimental and world musics, all come together in an exciting sonic celebration. The duo will perform their four part spontaneous composition “The Truth Triumphs”. You’ve never heard anything like this before!

Marque Gilmore is a US­-born drummer and future­-music producer with a worldwide reputation. He has lived more than a decade in Stockholm after previously living in both London and New York. As a musician, producer, composer and pioneer of live ’Breakbeat’ music, he has collaborated with artists as diverse as Bengali Sufi singers, Indian classical artists, Rock icons, African music masters and Jazz legends. Joe Zawinul, Sting and Vernon Reid are among just a few of the names associated with this innovative artist and his collaborative productions with Cuban pianist Omar Sosa earned two Grammy nominations in 2009 & 2013.

Jair-­Rôhm Parker Wells is an American bassist (bass guitar and electric upright bass), composer and conceptualist. He is one of the founding members of the improvising band Machine Gun which featured Thomas Chapin and the founder of the MEETING interdisciplinary arts festival (Stockholm, Sweden). He resided in Stockholm, Sweden from 1985 until 2010. Presently residing in Bangkok, Thailand, he has been active internationally as a promoter of improvised and experimental music performing and recording extensively. He has collaborated with Bob Belden, Karl Berger, Daniel Carter, Jaron Lanier, John Sinclair, Lol Coxhill and Tony Scott among others.

Lars Åkerlund is a composer, sound artist and performer of mainly electronic and electro acoustic music. Classically trained but mainly active in the alternative electronic scene, co-founding bands like P.I.T.T. (with Zbigniew Karkowski et al) and Lucky People Center (with Johan Söderberg and Sebastian Öberg).  He studied classical guitar at Conservatorio del Liceo, Barcelona and classical guitar and electro acoustic music at the Royal College of Music, Stockholm, at the EMS, Stockholm as well as musicology at the University of Stockholm.

He composes and performs live with computers, controllers and different live electronic equipment, such as amplified monochord.  Since the 90’ies he makes music for contemporary dance with choreographers Per Jonsson, Björn Elisson, Johan Inger and Cristina Caprioli and the Rambert Dance Company, London, Finnish National Ballet, Helsinki, the Gothenburg Opera Ballet, Stockholm Opera Ballet and most of the major Nordic dance companies, as well as the companies of the choreographers.
Touring in Africa, South America, South East Asia, East Asia, USA and Europe.